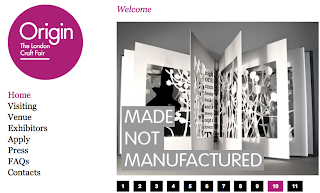 On the 23/09.2010, along with a few class mates i took the train down to london for the London Craft Fair, Origin. It was situated in Old Spitafields Market, one of London’s finest Victorian market halls set in an historic location in the heart of the City. The surroundings were so exciting and beautiful, with lots off gorgeous fashion and interior shops, as well as a selection of pretty cafes and classy bars. The craft fair its self was also nicely presented and well organised giving a very commercial feel to the fair, unlike others i have attended before that don't have the same status and high quality level of exhibitors like Origin. Despite the professionalism, There was a friendly and happy vibe to the place which was very warming. The majority of the exhibitors were friendly and welcoming. This positive buzz about Origin defiantly made me consider exhibiting here in the future as an option. It had been advertised well and the visitors were all very interested in the textile, craft industry which would be good for business and make exhibiting there worth while.
Each Exhibitor had a well sized stall that was all white and consisted of 2 to 3 large walls. The stall that i felt worked best were the larger corners as there work was easily viewable and the stalls didn't get as crowed as others. I found That some exhibitors Had over crowed their stall with work and the quality of it became lost in the chaos of the display. those who took a more simple approach more much more appealing and complimented the work so much nicer. One thing that stood out to me and was of upmost importance was how nearly almost all of the exhibitors applied there craft in several areas. For example they would apply there work too wall coverings, stationary, textile garments and other things. After to speaking to several exhibitors and finding out that most of them also had another income other that their craft it became apparent that they had to apply there craft in not just ways that they wished too, but those that were more commercial and will sell well. All in all i was pleasantly pleased with the fair and the people and would defiantly imagine myself hoping to be involved in the future.
Posted by Naomi Obbard at 11:30